Well… another week of radiation complete! I’ve been feeling quite a
bit more burned out and exhausted. I don’t feel comfortable in my body
for various reasons. My face and neck are even more swollen now from
the steroid etc. But, only 6 more radiation treatments! It can’t come
soon enough… Then I get my month break and hopefully I have less
pills to take and I can work away at getting to where I desire to be
with my “NEW” self. I crave a semblance of normalcy – to remember what
I used to feel like. Though I know it will always be different now – I
still believe I can find a fresh contentment in myself. I can be even
better! I mean, this whole situation has changed me in so many ways –
physically, mentally, emotionally, psychologically. Going forward my
life and perspective will never be the same. And that is OK. I can BE
and live my life however I choose – it’s all mine to do with what I
want!

In other news, my incredible husband Steve bought me a punching bag
and gloves! (Pic below!) It turns out that having a brain tumour can
really bring about a lot of rage and frustration. Who knew? Lol I’ve
started using it a bit and it’s really freeing! I’m going to add it to
my regular workout routine – which has been a slower process than I
would like. But I’ll get there. 😎

Steve and I did a photo shoot together last week for Halloween. He is
in the shoot too. 😁 I’m so proud of the work we did together! It
wasn’t easy for me with how I was feeling but I so much wanted to do
it. Steve did a gorgeous job with the editing. It’s called “Forever
Ghost”. It’s a love story. I included some of my favs here. My
absolute favourite is the one of us in the crystal ball. It’s a
reminder to me that no matter what happens we will always be together
– forever! 🖤🖤 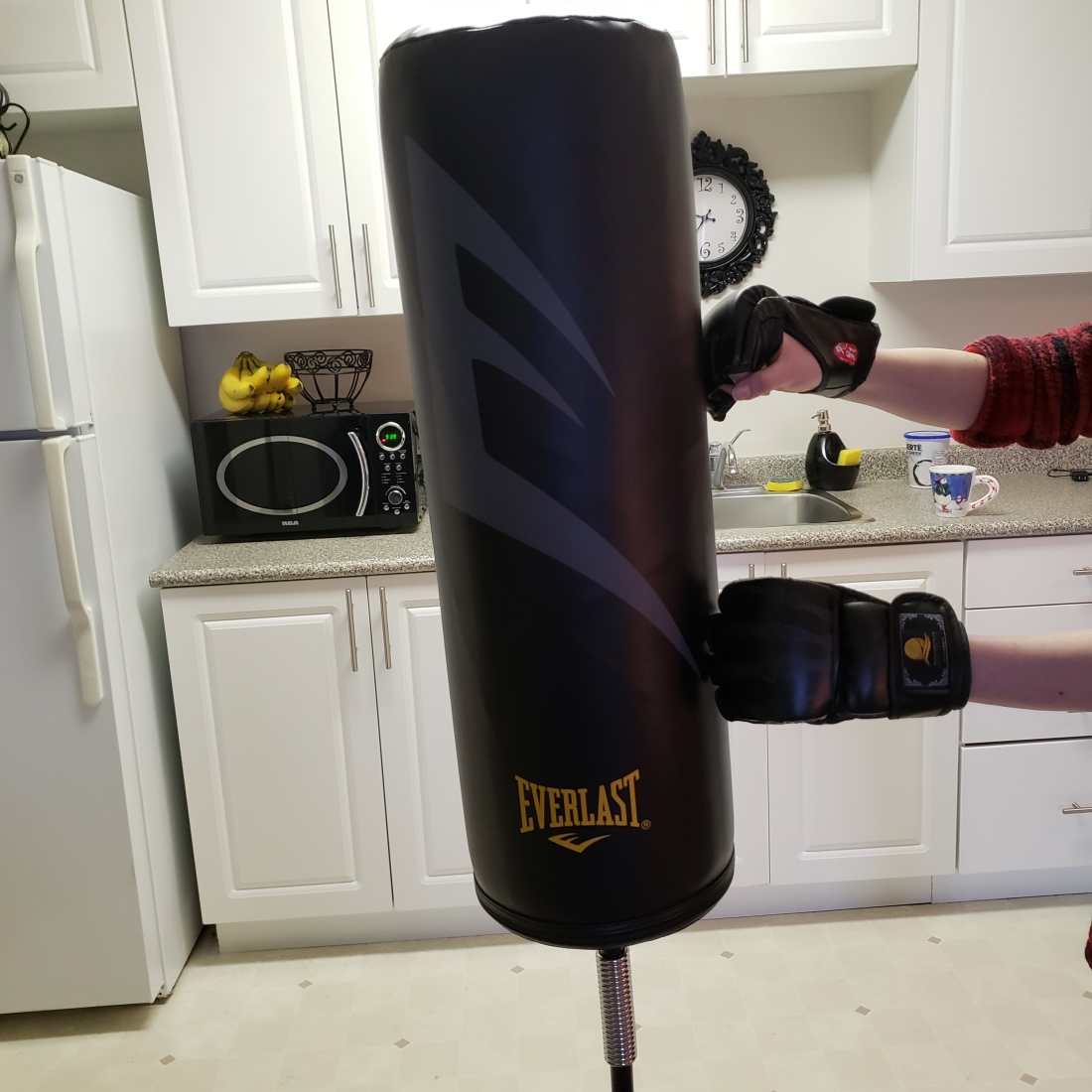 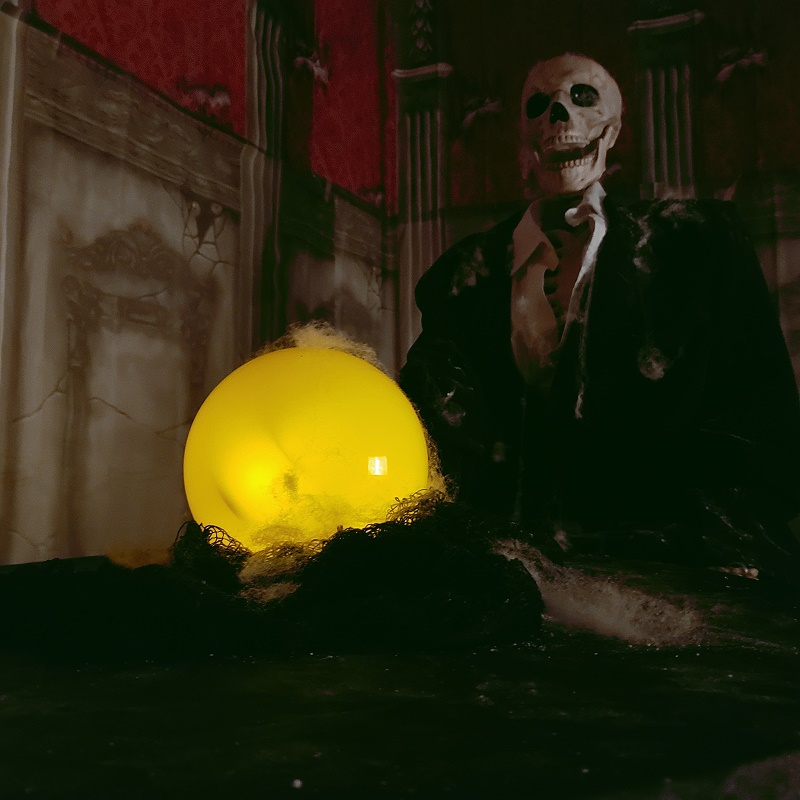 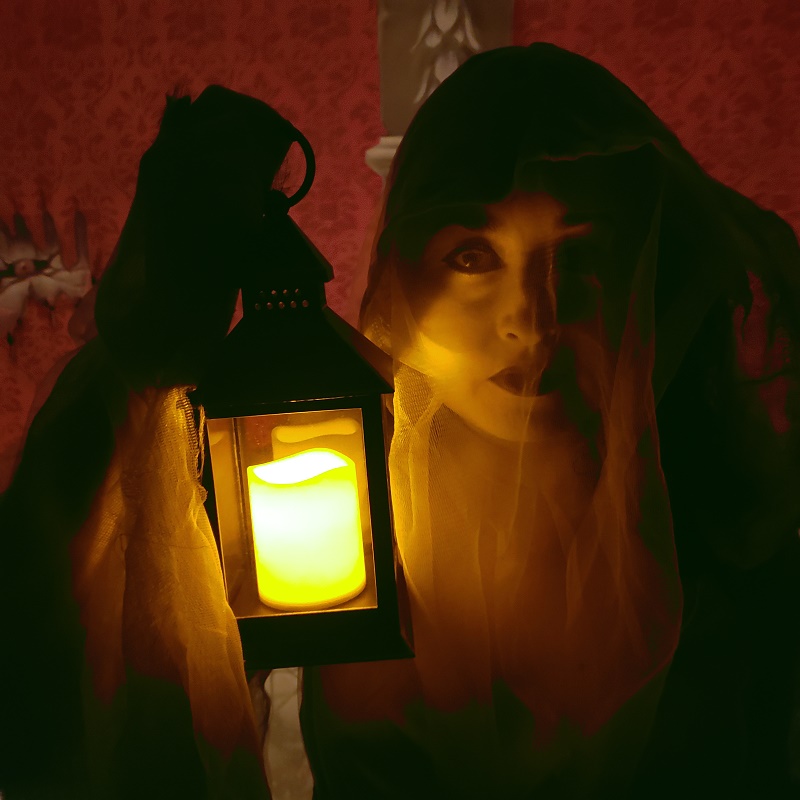 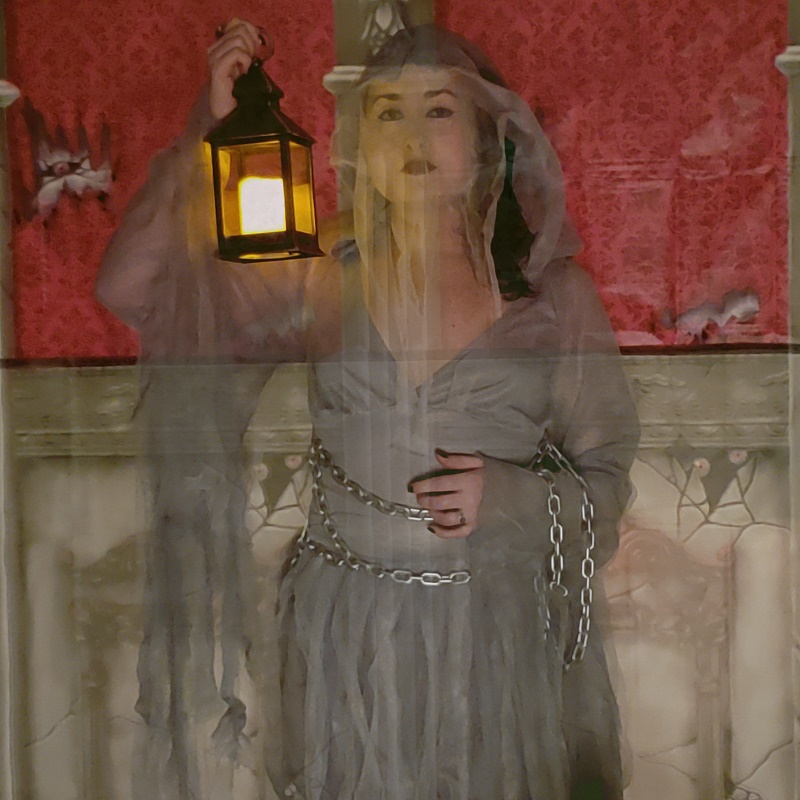 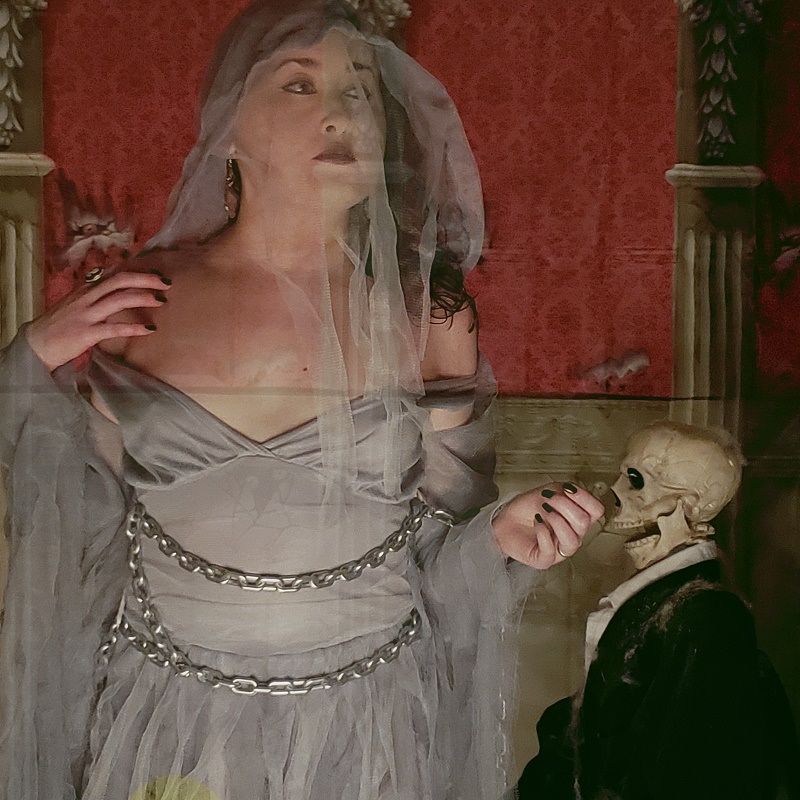 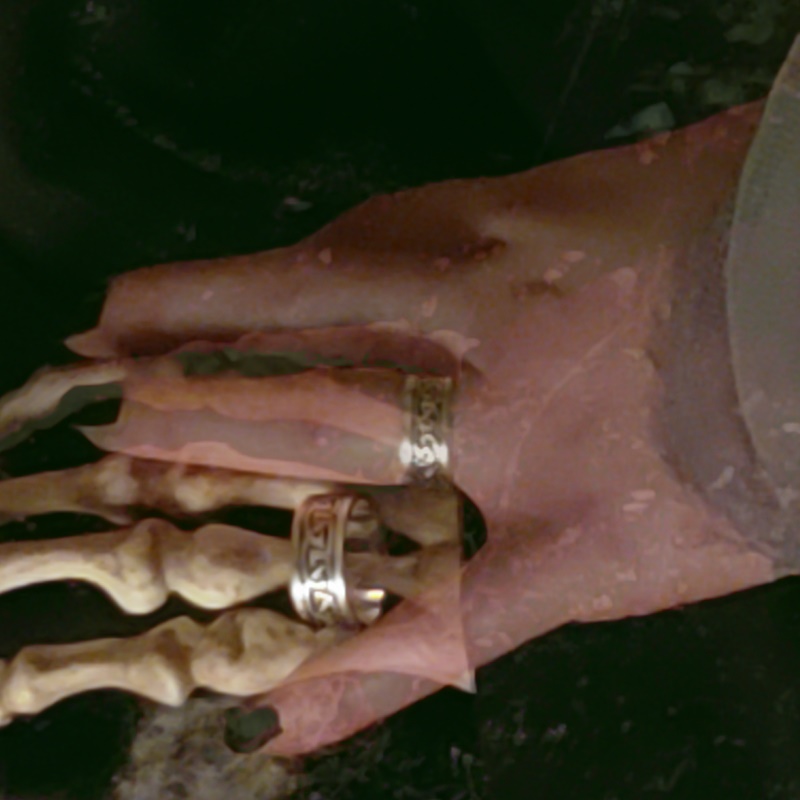 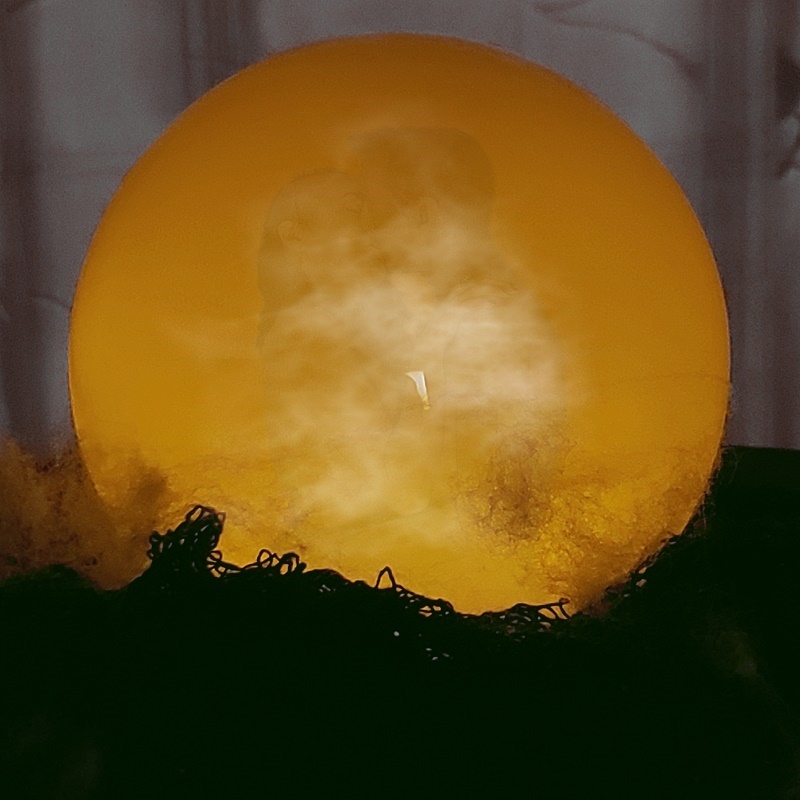 I’ve been struggling with an update lately. I mean, the basics are easy. So I’ll start with that. I finished my second week of radiation on Friday. It went as well as can be expected. I have a 3 day weekend off from driving to the cancer clinic as it is Thanksgiving for us tomorrow. I do take the chemo pills daily though on the weekends. My head is still uncomfortable or worse most of the time. And a new development is that my legs and knees get severely sore mainly at night and in the early morning. I’ve been trying to be more active but it’s been difficult because of my head pain. Before all of this I was working out for at least 2 hours a day. And now my body is not understanding what’s going on so it’s fighting me I guess, as I attempt to get back into things. Hopefully this part gets better soon. To try and help more with my head pain and the swelling from the radiation, I’m now taking more of the steroid I’ve been on. Unfortunately, this med makes me wired at night so I’m not getting nearly as much sleep as I would like. Also, it makes me feel hungry all of the time which really sucks. I know I have put on a bit of weight which is hard for me, but I suppose it’s better than wasting away. Still, it’s been another struggle. I did hear a little bit about the pathology reporting so far. The cells haven’t changed enough in one particular direction yet to determine the exact type of tumor and it’s grade. But they said they are treating it like it’s the worst – Glioblastoma Multiforme. It just means the treatment remains the same. Also, I have my MRI booked for December 4th. This is the one that will show where things are at after the 6 weeks of radiation/chemo and then the one month off. I’m glad to have a date but at the same time it’s scary…

I know some people want me to be super positive at all times, to be strong, to be a fighter at every moment of the day. I understand it is all well meaning. Of course people don’t want to see me suffering and being down in the dumps. And really, I wouldn’t say I am down in the dumps per se. But I am thinking and feeling A LOT! I want to clear up one thing too – Yes, I had surgery. But it was only to remove a small part of the brain tumor – to debulk it a little bit and also to do a biopsy. I’ve been getting a lot of people saying they hope I’m feeling better. But the reality is that I still have a giant cancerous, incurable brain tumor in my head. Incurable doesn’t mean I’m going to die right now. But I have flat out been told that unless I get taken out in some other way beforehand, this cancer is what is going to get me in the end – whenever that end may be. I’m hoping and praying for at least another 20-30 years. I still believe that can be! I believe in my medical team and the treatment and that they are doing everything they can to “fix” me. I also believe in my God and His power to bring me through this. And I also do believe in myself!

As far as the mental, emotional, psychological side of all this… It’s been REALLY, REALLY hard. I watch my husband and the hurt and helplessness, the fear that he goes through every day. I see it in his eyes so much of the time. I’m afraid too. Afraid of the unknown. I want answers but there aren’t any that anyone can give me as far as an outcome. I see the fear and hurt and not knowing how to deal with this, in my family. Steve, Steph, Haley, my mom and my sister. And I understand it because I watched my mom and sister fight breast cancer. And I’m currently watching my father-in-law also fight cancer.

In case anyone didn’t realize, Steph Dilts, my Pristine bandmate is my husband’s daughter. But she is so much more than that to me! She is my best friend! She came over last night and we worked on music together. It was so amazing! We are going to record a song we had been working on for a while and also do a video. I am excited! But she, like Steve, doesn’t know what to do with what’s happening to me. The reality is that no one really knows what it’s like to be in my body and to feel exactly what I’m going through mentally, emotionally, physically. And I don’t always know what I feel either. From the day I found out I had a mass in my head my life has completely turned upside down. There isn’t really a moment where I forget what is happening to me. I want to feel “normal” again – but I can’t remember what that is now. This stupid brain tumor has taken over my life, my husband’s life, his daughters, my family. We all feel and it’s not super-posi all of the time. It just can’t be. We are going to have our moments – and lots of them! The pictures below are of my family with my husband and his two girls – Steph and Haley. We’ve been a family for going on 18 years. And they mean the absolute world to me! I desire to live and to not see them go through the hurt of losing me. That thought is much more difficult for me than the idea of death itself. Though that is not far from my mind either. It’s difficult not to think about it truthfully.

But – I’m not dead yet and I’m not done! That is how I feel too. I want to continue on in the things I’ve been working at in my life for so long – Music, Modeling, Acting. These have been my passions and I want to create more. But I also feel a pressure that I’m putting on myself – a feeling of needing to “leave” something more on this earth. This mentality has been a struggle for me. I want to just do what I love as best I can and have that be enough. But I also want to not feel guilty about just spending time with my loved ones too and not having to always focus on a “legacy” if you will. I am going to get through this! See – I am still being positive. Don’t worry ;P I just felt I wanted to be more honest and say that it’s not been easy by any means – in so many ways.

If you took the time to read all of this – thank you. 🙂 I know I have so many people praying and rooting for me. Please know that it all means ever so much to me! xoxo