We had an interesting day today, that had a bit of a twist. Initially we were planning to go for a bit of a drive – maybe grab lunch – anything to get me out of the house. The week since my radiation finished has been a little tougher than I had hoped. I know I’ll never be my old self – but I’m looking forward to my new self, and I’ve been working hard for that. However, I still tire easily and it takes a little more effort than I thought to keep myself going. I’ve been trying to get out more, and today – I really needed to get out! So we were going to go for that drive, and I changed my mind – Let’s go for a walk. When Steve and I go for walks now-a-days we set destinations, so I can set goals and pace myself. I miss the days of just the two of us walking and walking, and not caring where we were going or worrying about when or how we’d get back. But that’s another story. Today we set a destination – the liquor store – but before you judge – there was a reason that went beyond alcohol. I haven’t had very much to drink since all this started happening. A glass of wine here and there. My favourite drink used to be Forty Creek Whisky. Steve’s a beer drinker, but around the holidays he likes to have his CC. So – it’s snowing around here, and we lit the pine scented candle, and we talked about Christmas – and we realized, our bar is very poorly stocked anymore. People come to visit to bring flowers and give me hugs – Nobody comes for shots and to let loose. We decided to head to the liquor store to make sure we had Forty Creek and CC for Christmas. That’s actually a very sentimental reason – ask anyone that knows us. We set out on our walk. It was so nice to put on a warm coat and hat, and walk in the cold air. When we got to the store, Steve grabbed his CC and I went for my Forty Creek. I was grabbing the bottle and Steve said – “You get a free glass with that. That’ll replace the one you broke”. I broke a glass a couple of days ago, so we thought that was nice how things worked out. Then we walked home. We left the bag on the kitchen floor and went on to other things. Steve eventually decided to put the bottles in the bar – and he opened the box that was on top of the Forty Creek bottle.

This is the box.

And this is the glass that was inside. 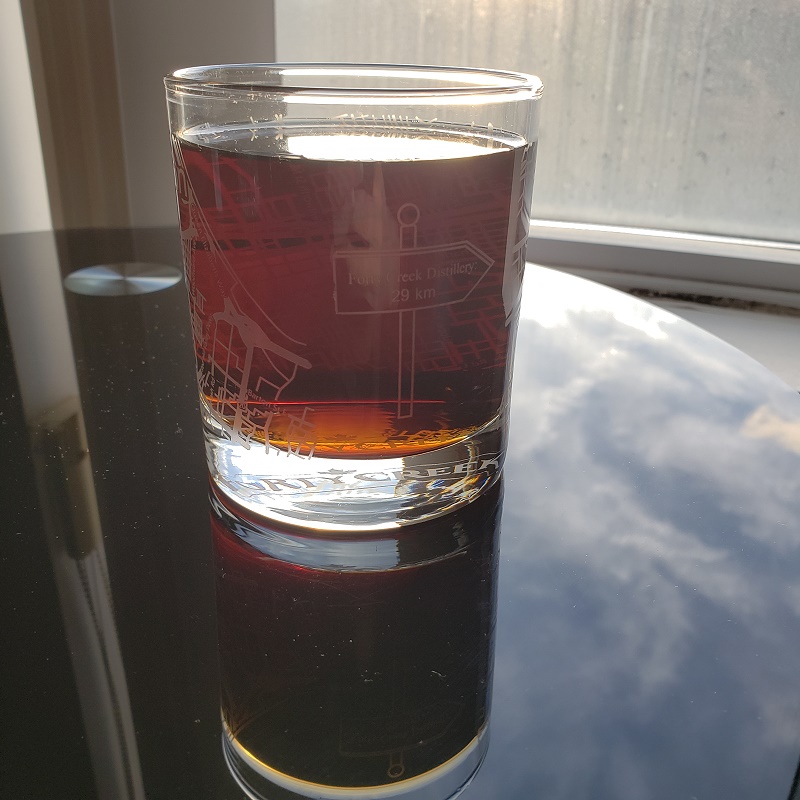 Steve showed me and we laughed. For those that don’t know – Hamilton is where I had my brain surgery, and where I had my radiation, and where I will continue with my chemo and any other treatments. We had no idea what the Forty Creek promotion was supposed to be, but Steve saw the “Forty Creek – 29km” sign and figured it had something to do with Forty Creek being so close to Hamilton.

Then we read the back of the box. 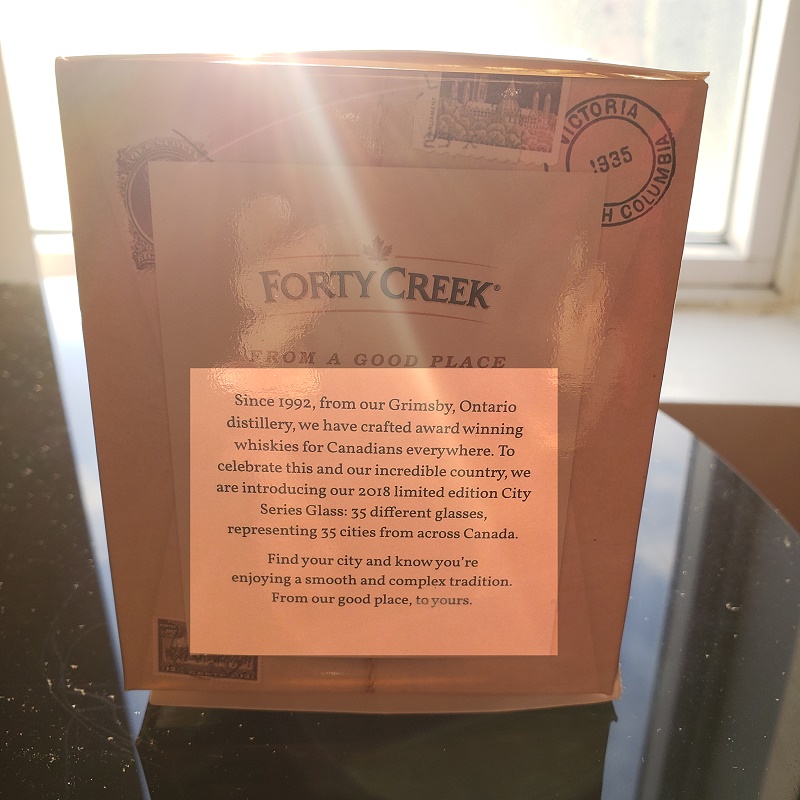 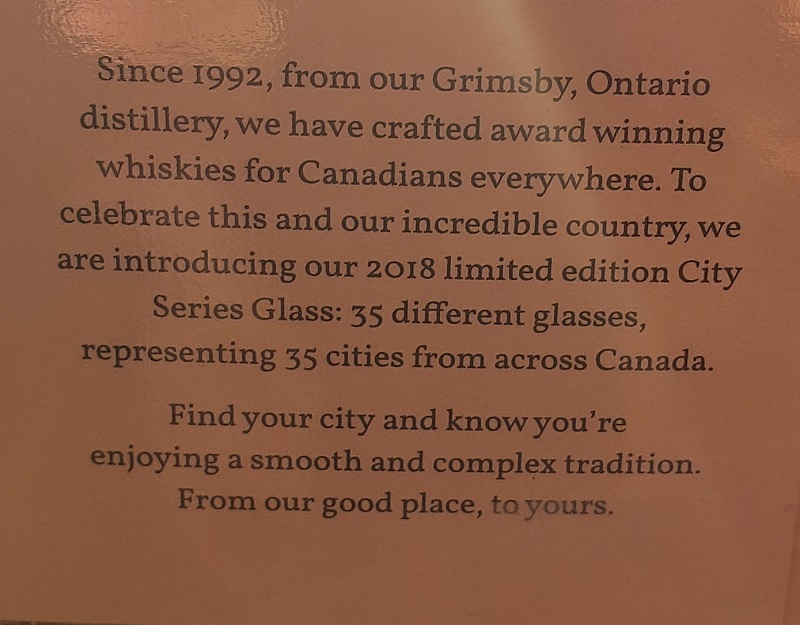 35 cities, and I picked up “Hamilton”. Then Steve looked closer at the glass.

This is an outline of Hamilton on Google Maps. 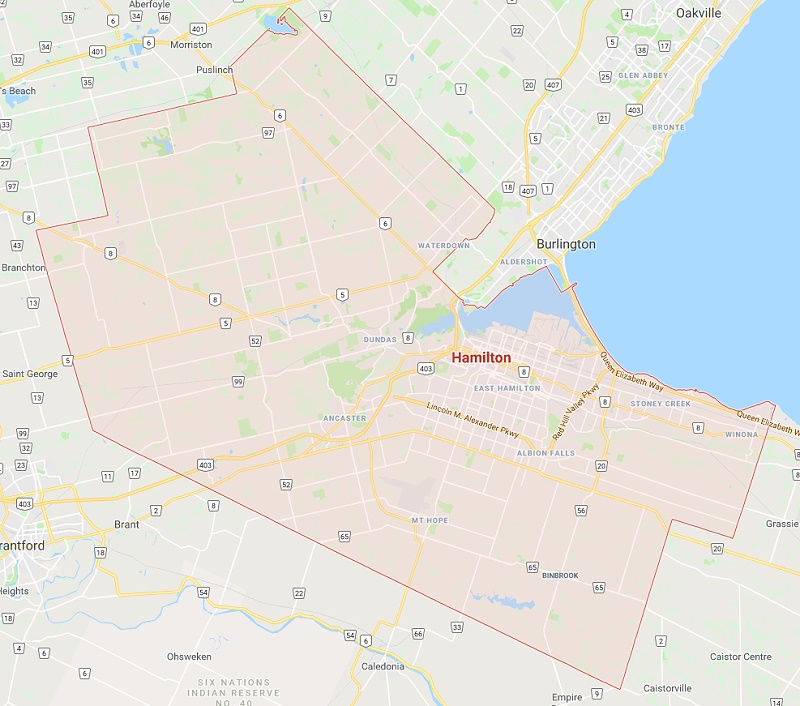 This highlighted area is approximately what appears on the glass.

That’s this section of Hamilton.

This is the route we take to get to my appointments at Hamilton General – and where I ultimately had my brain surgery.

This is the route we took everyday for six weeks to Juravinski Cancer Centre for my radiation, and where I’ll go for any future treatment. 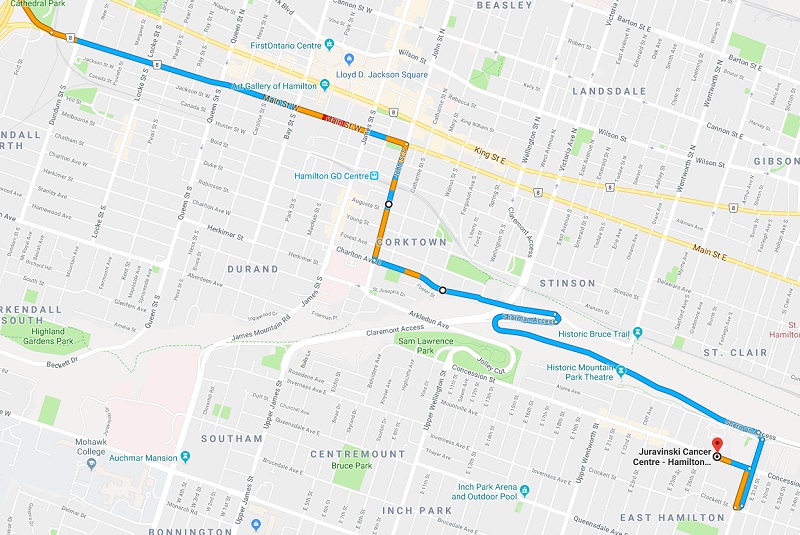 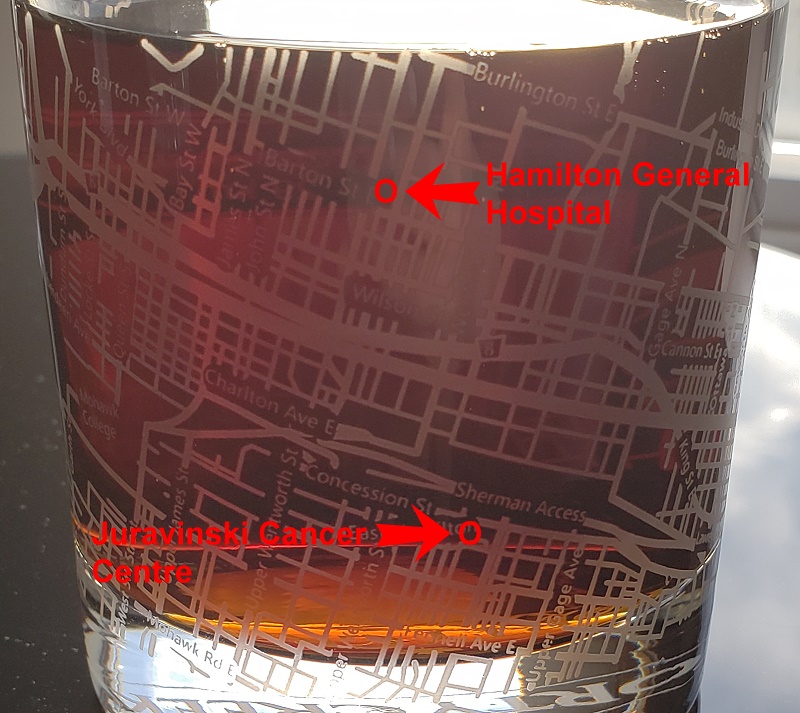 I've been modeling for over 16 years and singing most of my life - And even acted in a few movies. My husband and I were at a point in our life where we were making changes and plans for what we were going to do next. Then on August 20, 2018 I woke up with a headache. The story starts a couple of days later when the headache wouldn't go away. Some of the posts were written by my husband Steve, when I was not able to. But this is his story too! View all posts by Kelly Abbass